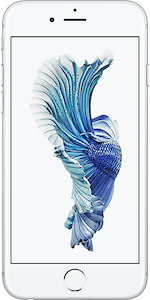 The iPhone 6s was thought of as the perfect upgrade to the iPhone 6, back when it launched in 2015. It fine-tuned everything that Apple's smartphones do best, and introduced 3D Touch and the cool rose gold colour. These days, it's still a great phone, and doesn't have a price tag quite as high as later models.

Naturally, you get an iPhone on the cheap, but there are ways to manage the cost and get yourself the best deal. Thankfully, there are a number of networks out there who offer some great deals, as well as a plethora of different contract lengths, too:

iPhone 6s at a glance

With its strengthened aluminium chassis, the iPhone 6s feels great to hold in your hand. On the front, there's a 4.7-inch Retina HD display, with 3D Touch so you can press harder on icons to perform different tasks.

It's got a Touch ID fingerprint sensor under the home button so you can use Apple Pay, and it's also the last generation of iPhone to include a standard 3.5mm headphone jack.

On the back, meanwhile, you'll find the 12MP camera with True Tone flash. It can take moving Live Photos and record 4K video, and it uses Focus Pixels that work harder for crisper photos.

And under the hood, the phone runs on an Apple A9 processor and 2GB of RAM, plus a 1715mAh battery that gives you around 14 hours' use.

You can get an iPhone 6s deal with unlimited data from a couple of networks - namely Three and giffgaff right now. Three's unlimited plans have a fair usage limit of a massive 1000GB per month, but bear in mind that with giffgaff your speeds will be slowed once you've used 9GB in a month. Find out more about how much data you need.

Not totally sold on the iPhone 6s? With our mobile comparison tool, you can compare deals on multiple handsets all in a single place to help you decide.

Take a look at some similar iPhones, such as the slightly larger iPhone 6s Plus and more recent iPhone models, as well as some top Android smartphones:

To find a cheap iPhone 6s deal, we recommend following the steps above then sorting the results by cost, which shows you the lowest-priced deals first.

To get the cheapest possible deal, there are a few things you can do:

At 4.7 inches, the iPhone 6s is a decent size, even compared to newer models. And is clear and crisp enough to enjoy movies on the go. With only a single main camera, it's not equipped to take portrait shots, but still serves up photos that are good enough to share on social media.

If you're a on budget, you could do worse than the iPhone 6s. But we'd suggest you also take a look at the comparably priced iPhone 7 range and the iPhone SE 2020 before committing to a contract.

Does the iPhone 6s support 5G?

The iPhone 6S is compatible with 4G and 3G networks, but not 5G. Apple is expected to release its first 5G phone some time in 2020.

Is the iPhone 6s waterproof?

How many cameras does the iPhone 6s have?

The iPhone 6s has two cameras: a single-lens 12-megapixel main camera and a five-megapixel front camera for selfies.

What size is the iPhone 6s?

The iPhone 6s comes in at 4.7 inches. While that's not as large as the newest iPhones, it's a good size for watching video on the go.

Does the iPhone 6s have wireless charging?

Can I get an iPhone 6s with bad credit?

You've got a much better chance of being accepted for an iPhone 6s on a contract than one of the newer iPhones. Or you may prefer to buy the phone upfront and get a SIM only deal, which won't require a credit check.

Can I get an iPhone 6s with no upfront cost?

As you might expect with an older iPhone, there's a huge range of contracts available with no upfront charge.

Does iPhone 6s have a portrait mode?

The iPhone 6s is not equipped with a portrait mode for its front or rear camera. The most affordable iPhone with portrait mode functionality is the iPhone 7 Plus or iPhone 8 Plus.