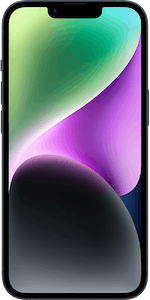 Autumn means a brand new iPhone, and in September 2022 that means the iPhone 14. This year’s cohort brought a few iterative improvements, and the classic iPhone design we know and love.

Compare contract deals on the handset above, or read on to learn more about it.

The iPhone 14 at a glance

If you liked the look of the iPhone 13, then you’ll love the iPhone 14 too, because it’s virtually identical.

It has almost the same dimensions: 147mm tall with a 6.1-inch display. The bezels around the screen are ultra thin, with a wider notch at the top for the selfie camera.

The whole thing is uber-strong Gorilla Glass, both front and back, with an aluminium frame. The colours you can choose from are blue, purple, black, white, and red.

With the iPhone 14, you get two camera lenses on the back – a 12MP main lens and a 12MP ultrawide one – as well as a 12MP selfie camera too.

The setup gives you a few small improvements on the iPhone 13. Most notably, it has wider aperture on the lenses, greater pixel size, and dual-tone flash, all of which mean better low-light performance.

It’s also amazing for shooting video. You can record in 4K resolution at up to 60fps or HD up to 120fps, and take advantage of the new Cinematic Mode for pro-looking reel.

The iPhone 14 is powered by Apple’s A15 Bionic chipset – the same as the one in the previous iPhone, which is hopefully an indication that it simply doesn’t need improving.

In terms of comms and connections, it has the latest generation of Wi-Fi, and of course 5G. But there’s another trick up its sleeve too: satellite connectivity and crash detection for emergencies.

The battery, meanwhile, is the best on a standard iPhone to date as of 2022. Apple claims it can handle up to 20 hours of video playback on a single charge, which should be equivalent to at least a full day of use.

Can I get the iPhone 14 with no upfront cost?

All kinds of contract deals are available on the iPhone 14 from networks and retailers galore – so you’re bound to find some with no upfront cost, or a very low one.

To find those deals, use our comparison tool. Just adjust the upfront cost filter to only show those with nothing to pay today (or as much as you’re willing to spend right now).

With its top-of-the-line tech and high-resolution display, the iPhone 14 should be worth buying for many years to come. Despite the autumn 2022 release date, it won’t be obsolete for quite some time.

What’s the difference between the iPhone 14 and iPhone 13?

The iPhone 14 is just a gentle update from the iPhone 13, but you’ll find a few noticeable differences:

Can I get the iPhone 14 with poor credit?

It might be a challenge. Mobile networks always perform credit checks for contract deals, and expensive flagship phones like the iPhone 14 tend to have the strictest of those checks.

If you have a bad credit history that’s stopping you from getting a contract, you may be better off buying the iPhone 14 outright and choosing a SIM-only deal instead.