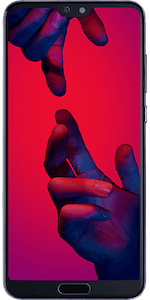 Going head to head with the big hitters, Huawei has delivered an Android phone that excels at the important stuff – boasting high-end specs, great battery life and triple-camera functionality.

Premium flagship phones do not come cheap. And the Huawei P20 Pro is no different.

To help you get the most for your money, we've outlined the key selling points of P20 contracts on all the UK's major networks.

BT, which piggybacks on EE’s mobile network, offers generous coverage across the UK. And if you’re an existing broadband customer, you’ll get a reasonable discount on its mobile phone contracts packages.

Huawei P20 Pro at a glance

Well-built and beautifully designed, the Huawei P20 Pro is a top-notch handset, whether you’re taking photos in ultra-low light or getting a full day's use off a single charge.

With plenty of storage (and RAM to boot), this classy phone boasts an impressive build, a decent camera and an excellent battery. There’s a great deal here to admire.

It’s not the quickest smartphone in the market, there’s no wireless charging, and it’s likely too big. But it’s an absolute stunner; and with its three rear-facing cameras, it’s a photographer’s dream.

Competing as it does with the latest iPhone and Samsung Galaxy models, the Huawei P20 Pro also matches their rather hefty price tags.

When weighing up which network to take out a mobile contract with, consider the ways they split their costs. Some require a large sum upfront and then a lower monthly fee, while others flip this and include a higher monthly fee, but you’ll pay less upfront.

Some mobile contracts, particularly on premium smartphones, include a sizeable upfront fee - on top of your monthly contract cost.

If you’d rather avoid such a fee, there are networks that let you spread the cost of your new phone over the course of a contract.

You’ll see this referred to as a “free device” which isn’t technically correct - it just means you won’t pay anything upfront. However, it does mean you will pay a higher fee each month.

The upside to this is you get a new phone in your hand without first handing over hundreds of pounds. You can compare network deals and vary the amount you’re comfortable paying upfront against the amount you pay each month.

Don't fancy forking out for a brand-new handset? Why not try a refurbished phone. Winningly, you'll often find these handsets in decent condition - in some cases, they may have only been used a few times. All we can say is be sure to read the small print to check the condition of the phone in before you buy.

It’s also critical that you check that the phone is unlocked before you buy it. This means it won’t be tied to a particular network provider, so you can effectively shop around for the best deals.

These days, most resellers issue refurbished phones on a monthly contract. You can check out refurbished contracts here.

Despite being two generations behind, the Huawei P20 Pro still holds up as an excellent smartphone. Indeed, if you can get one for a good price, it’s absolutely still a good buy.

Standout features include a 40-megapixel and 24-megapixel cameras which are superb for low-light shots, and an 8 -megapixel telephoto sensor with optical image stabilisation (OIS) for blur-free photos and excellent video recording.

Unfortunately, the Huawei P20 Pro does not come with the 5G connectivity.

Is the Huawei P20 Pro waterproof?

The Huawei P20 Pro is rated IP67. This means it can be submerged in one metre of fresh water for up to 30 minutes.

How many cameras does the Huawei P20 Pro have?

What size is the Huawei P20 Pro?

Does the Huawei P20 Pro have wireless charging?

Unfortunately, the Huawei P20 Pro does not support wireless charging.

Can I get a Huawei P20 Pro contract with bad credit?

If you have a poor credit rating, you might find it difficult to get a phone contract – especially for a new handset.

To that end, we’d suggest you either save up and buy it SIM-free and then get a cheap SIM only deal. Or take a look at contracts for cheaper iPhones that you're more likely to be approved for.

Can I get Huawei P20 Pro deals with no upfront cost?

If you do opt for a contract with no upfront costs, it does mean you will pay a higher fee each month. However, you get a new handset without first handing over hundreds of pounds.

Does the Huawei P20 Pro have portrait mode?