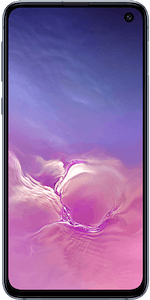 Although it lacks some of the same cutting-edge tech found in the S10 and S10 Plus, the Samsung S10E is a seriously impressive smartphone, jam-packed with brilliant specs and features without the premium price tag.

Galaxy S10e at a glance

Here's some of our favourite specs and features:

Sort the Galaxy S10E deals in the comparison tool by cost to see the cheapest ones that fit what you're looking for. Ranking by total cost will show you which deals offer the best value across the whole contract; or monthly cost shows you the ones with the lowest monthly bills.

A Samsung Galaxy S10e deal with no upfront cost may mean a more expensive bill each month, but these plans certainly are available - and from quite a few networks, too.

Samsung’s budget smartphone, the S10E, clocks-in at 5.8 inches, and comes with a gorgeous edge-to-edge display. Moreover, it operates using Android 9.0 Pie; the same operating system as its predecessor, the Galaxy S9.

Indeed, if the specs and features below are anything to go by, the S10E will be an impressive bit of a kit for a so-called 'budget' handset.

Use CompareMyMobile's comparison tool to find the best iPhone 8 Plus deal. We pull in deals from a range of UK networks and resellers so you can sort through them and see which one is best for you. The filters at the side of the page will help you narrow them down to ones that fit what you need.

Take a look at some other phones that are similar to the Galaxy Note 8 and compare all your options before you commit to a plan.

As one of Samsung's newer phones, the S10e still has a lot to offer. Even if it's not quite as up to the minute as the likes of the S20 range.

At 5.8 inches, it's relatively compact by the standards of Galaxy S smartphones. But still packs in an impressive dual lens camera, lots of storage and a powerful processor. And you can pick it up on some very keenly priced contracts too.

The S10e does not work on 5G networks, which means you won't get the fastest mobile internet speeds. If 5G connectivity is a primary consideration for you, we'd recommend the Galaxy S10 5G. But expect to pay substantially more.

Is the S10e waterproof?

The S10e is water-resistant, rather than waterproof. And with an IP68 rating, it can endure being submerged in 1.5 metres of water for up to half an hour.

How many cameras does the S10e have?

The S10e packs in three cameras in total. There are two at the rear, namely a 12-megapixel standard lens and a 16-megapixel ultrawide lens. Then at the front, there's a 10-megapixel selfie camera.

What size is the Galaxy S10e?

Does the S10e have wireless charging?

The S10e can be charged wirelessly and has a fast-charging wireless mode for when you're in a hurry. It also offers reverse wireless charging, which allows you to share power with compatible smartphones.

Can I get the Galaxy S10e with bad credit?

You might find it hard to get the S10e if you've got an impaired credit rating. If you're not successful, we'd suggest you either save up to buy it SIM-free or consider a cheaper phone.

Can I get the Galaxy S10e with no upfront charge?

You can. Lots of networks offer the S10e on monthly contracts which don't require you to pay anything up front. The catch is that this type of contract generally features a higher monthly premium. So you'll probably end up paying about the same by the end of your contract.

Does the Galaxy S10e have portrait mode?

It does. The Live Photo mode on the rear camera lets you take bokeh shots and manually adjust the level of background blur, according to your taste. You can also apply the same 'depth-of-field' shots with the selfie camera.