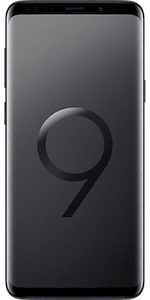 Big and beautiful: that’s the Galaxy S9 Plus. In terms of features and power, you won’t see huge differences from the S9, but the S9 Plus’s dual-rear cameras and huge 6.2-inch QHD+ display will certainly convert some doubters.

Refurbished Galaxy S9 Plus at a glance

At 6.2-inches, the expansive dimensions of the Galaxy S9 Plus won’t be for everyone. But while it's less pocketable than smaller smartphones, the S9 Plus' large, bright screen make this a brilliant choice if you watch videos or gaming on the go.

It packs in a great camera too, with a dual lens set-up at the rear that pairs a 12-megapixel standard, telephoto lens with a 12-megapixel wide lens.

The result is that the S9 Plus camera performs exceptionally in low light conditions, helped in so small part by a very wide aperture that lets in lots of light.

The front camera is no slouch either, with a 'bokeh' mode that enables you to blur out the background. The result? Some really arresting selfies.

A 3,500 mAh battery powers the S9 Plus and we found it lasted about a day and a half before you need to recharge. And if you do run low, there's a handy fast-charge mode.

Other key specs of the S9 Plus include:

What is a refurbished Galaxy S9 Plus?

What's the difference between a refurbished, or reconditioned, Galaxy S9 Plus and a new phone? Well, in a nutshell when you buy a refurbished phone you're getting a second-hand model that was returned to a retailer or network by its former owner.

It could have been returned for any number of reasons: possibly due to a fault or simply that the owner simply changed their mind.

What can you be sure of is that a refurbished Galaxy S9 Plus will have been restored to its factory settings and given a thorough maintenance check and repair. So it's effectively as good as new.

Should I buy a refurbished Galaxy S9 Plus?

What’s the difference between a nearly new S9 Plus and a refurbished model?

Generally, a nearly new handset is one that has been returned within seven days, so it is all to all intents and purposes as good a new.

More often than not nearly new handsets would have only left their box a few times. And have been barely used by the previous owner, if at all.

Alternatives to a refurbished Galaxy S9 Plus

Not sure a refurbished Samsung Galaxy S9 Plus is quite what you're looking for? Take a look at deals for a selection of similar handsets below:

And if you think you'd prefer a brand new Samsung Galaxy S9 Plus instead, click on the button below to see our pick of today's standout deals: