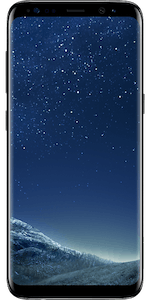 After the flawed Note 7, Samsung came roaring back with the flagship Galaxy S8. Showing off a large, sharp bezel-free display with one of the best cameras around, this speedy and powerful phone is a real looker.

There are major savings to be when you buy a refurbished Samsung Galaxy S8, instead of a brand new model.

We'll help you find a really good deal for your outlay.

When you buy a refurbished Galaxy S8, you're getting a pre-owned phone that has been returned by its former-owner. Generally, it will have been returned because it was found to be faulty.

But you can still buy with confidence. Before a refurbished phone is offered for resale it's repaired and thoroughly checked over.

As a condition of resale, it's also wiped of the previous owner's personal data and given a deep clean.

Refurbished phones also come with a guarantee. Which generally lasts 12 months. So if a fault emerges, you're covered.

What you won't get with a refurbished phone is that 'new phone' feeling. And you shouldn't expect to get accessories, such as a charger, charging cable and earphones, in the box either.

Why choose a second hand Galaxy S8 over brand new?

In a world where prices for brand new, cutting-edge phones seem to rise every year, refurbished phones are a really good bet. Here's why:

You'll save money - That's more cash to spend on apps or games.

They're guaranteed - So you don't have to worry if faults become apparent.

You're doing your bit for the environment - It's greener to buy a recycled, refurbished phone.

Is a refurbished Samsung Galaxy S8 worth buying?

On first release the Samsung Galaxy S8 was the flagship phone to own.

Its sleek 5.8-inch screen stretching from curved edge to curved edge put a real marker down for the look and feel of future smartphones.

Fast and powerful, the S8 is light and easy to handle with a noticeably improved camera function over the S7 - whether you’re taking landscape or portrait shots, you’ll notice real versatility.

Some minor grumbles about the rear fingerprint scanner and Bixby virtual assistant aside, Samsung really raised the bar with the S8.

With the release of further Galaxy handsets, you should see some great price reductions on this model - particularly on refurbished contracts.

Not sure the S8 is for you? Take a look at deals for alternative phones that might suit you better:

Prefer a brand new Samsung Galaxy S8 instead of refurbished? Click on the button below to see our pick of the best deals.