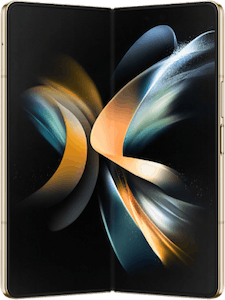 The Samsung Galaxy Z Fold4 is here. The smartphone that becomes a tablet is one of the best phones around, so read on for all the details and find out how you can lay your hands on one.

Here at Compare My Mobile we have loads of great Samsung Galaxy Z Fold4 deals. Snag one now and you’ll have a device that looks and feels like nothing else around.

The Samsung Galaxy Z Fold4 is part of Samsung’s 2022 folding phone range, along with the smaller Galaxy Z Flip4. Folded it’s a beautiful smartphone, with a 6.2-inch Dynamic AMOLED 2X display that feels just like a standard device. Opened up it becomes a tablet, with a 7.6-inch screen built for streaming as well as work.

The camera is the same triple lens effort as that on the Samsung Galaxy S22. The unique hinged screen makes this a device apart and while it’s twice as wide as a normal phone when folded, it offers far more in terms of versatility.

That makes it even more expensive than the Samsung Galaxy S22 Ultra. You’re paying a premium for the dual screen setup, but also for having a phone that looks like nothing else around.

The design of the Samsung Galaxy Z Fold4 is sturdier and sleeker than the Galaxy Z Fold3. It has toughened aluminium edges that mean it’s well protected from bumps and scrapes when dropped, while the Gorilla Glass Victus tech protecting the front screen means it’s unlikely to crack either.

The overall feel is impressive. When opened out it’s hard to discern the hinge, meaning unimpeded viewing while streaming video or working (you can open four apps at once). The finish feels premium, as you’d expect for the price. As this tech is still in its infancy, though, it can feel bulky compared with standard smartphones.

The Samsung Galaxy Z Fold4 packs the same camera as the Galaxy S22. So, you get a triple lens effort with a 50MP wide lens, 12MP ultrawide lens and 10MP telephoto lens, as well as 3x optical zoom and Space Zoom smarts. On the front there’s a 10MP selfie camera, while the main screen also houses a 4MP secondary selfie snapper.

The results are eye catching, with great images taken day and night. Details are well rendered and bright, while dedicated night shooting modes make pictures taken after dark look ace. We just wish that Samsung had opted to include the Galaxy S22 Ultra’s class leading camera.

Under the hood the Samsung Galaxy Z Fold4 is the real deal. It has a cutting edge Qualcomm Snapdragon processor, a massive 12GB of RAM, and the option to buy storage up to 1TB.

The clever Flex Mode allows you to fold the screen and use the Fold4 like a laptop, making it extra handy for working on the go. The 4,400mAh battery means it can last a whole day on one charge, with fast charging allowing you to get it back to full power rapidly. Chargers are sold separately. There’s also S Pen support, but again you’ll need to stump up more to get one.

Can I get the Samsung Galaxy Z Fold4 with no upfront cost?

Is the Samsung Galaxy Z Fold4 worth buying in 2023?

It might be eye-wateringly expensive, but the Samsung Galaxy Z Fold4 is definitely worth buying if you can afford it. It takes smartphones in a whole new direction and promises to be the future of mobile.

What's the cheapest way to get a Samsung Galaxy Z Fold4?

The cheapest way to get the Samsung Galaxy Z Fold4 is to buy it SIM free and pair it with a SIM-only deal. This is best if you have the cash available, as you can get SIM-only deals from just £4 per month.

Can I get the Samsung Galaxy Z Fold4 with poor credit?

The only way to get the Galaxy Z Fold4 with bad credit is to buy it outright and get a SIM only deal from a network that offers contracts to those with a poor rating.