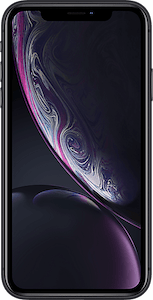 With high-end specs and superb performance, the iPhone XR is an impressive addition to the iPhone range. A few design compromises keep its price down too.

iPhone XR at a glance

The iPhone XR keeps all the bits that make iPhones so great but pares down a few elements to keep the price down a bi. We're fans. And here's why.

For starters, it's an elegant, all-display smartphone and the colour options (red, blue, yellow, white, black, and coral) really stand out in a sea of identikit handsets.

We also love the large 6.1-inch screen, which isn't quite as bright and brilliant as the XS display, but looks great all the same.

The glossy, glass rear means the XR can be charged wirelessly and the battery life is best of any iPhone.

And the camera's no slouch either and handles most shots and scenes with aplomb. Although, the portrait mode isn't quite as good as the higher-end rivals, it's still pretty serviceable.

Very much so. Now available for a very appealing price, 2018's iPhone XR offers brilliant battery life and the same striking all-screen design as the more costly XS and iPhone 11 range. While the portrait mode could be better, the front and rear cameras generally perform very well. And it's got wireless charging and comes in a selection of colours too.

Need an iPhone XR deal with a lot of data? Got an idea of how much you'd like to pay upfront for an iPhone XR contract? Maybe you're in the market for some value-adding freebies? We've tracked down our best iPhone XR deals, whatever your criteria.

So you're in the market for an iPhone XR, but don't want to break the bank? Here's some tips to help you get the most for your money.

There are different ways to manage the cost of a new iPhone XR. If you’re keen to avoid paying an upfront fee and would rather spread your costs over the course of a contract, there are network suppliers which offer this option.

Suppliers refer to this a ‘free device’ which isn’t technically true - it just means you won’t pay anything upfront. However, it does mean you will pay a higher fee each month. The plus is you get a shiny new premium iPhone in your hand without first forking our hundreds of pounds.

Even though the iPhone XR isn't quite as expensive as the iPhone XS or XS Max and has been playfully referred to as Apple’s ‘budget’ smartphone, it's not cheap. And is, in fact, priced in line with many rivals' flagship phones.

What you get for outlay depends largely on which network you choose. To put you in the picture, here's a snapshot of the key selling points of the UK's largest networks.

O2's Priority scheme is one of the best customer rewards offers around and gets you priority booking in O2 venues, as well as freebies and money-off in high-street stores. O2 customers also get inclusive roaming in O2's Europe Zone.

Pick up the iPhone XR on Vodafone's Red Entertainment deals and you get to choose from a 24-month subscription to Sky Sports Mobile, Amazon Prime Video or Spotify Premium. Want a Now TV Entertainment Pass instead? That's up for grabs too.

Find out more with our Vodafone network review.

EE is a premium network and is consistently rated the UK's best by analysts Root Metrics. Key selling points on EE iPhone XR contracts include Swappable Benefits, such as the BT Sport App or Video Data Passes, and inclusive roaming in 48 European locations.

Get the measure of everything EE's got to offer with our EE network review.

Buy the iPhone XR on Three and you can get use of its Go Roam Around the World scheme, which allows you to use your UK roaming allowances in 71 locations around the world for no extra charge. Select iPhone XR Three contracts also include its zero-data streaming add-on, Go Binge.

Get a fuller picture of what's on offer with Three, with our Three network review.

Can I get an iPhone XR contract with bad credit?

Does the iPhone XR support 5G?

Unfortunately not. The iPhone XR is not 5G-compatible, which means you won't be able to get the super-fast mobile internet speeds that some newer phones can muster. However, it does support 4G and 3G, both of which are much more widely available.

Is the iPhone XR waterproof?

It's not waterproof. But it is water-resistant and comes with an IP 67 rating, which indicates that it can endure being in up to one meter of water for up to half an hour. As you'd expect, it can withstand splashes and exposure to rainwater too.

How many cameras does the iPhone XR have?

The iPhone XR has two cameras. These are a single-lens, 12-megapixel main camera and a seven-megapixel front camera.

What size is the iPhone XR?

The iPhone XR comes in at 6.1-inches, which means it's slightly larger than the iPhone XS but smaller than the XS Max and iPhone Pro Max.

However, because the iPhone XR has ditched the bezels (edges) that normally surround smartphone screens, Apple been able to fit a large screen in a compact handset that's just 150.9mm thick.

Does the iPhone XR have wireless charging?

The XR can be charged wirelessly with charging pad (sold separately) or in hotels, cafes and airports that offer free-to-use wireless charging pads. It's not as fast as wired charging, though, so expect to wait about two hours to get a full charge.

Does the iPhone XR have a portrait mode?

Yes, it does. Generally phones require two rear lenses to allow you to take portrait mode photographs. However, some clever software optimisations mean that you still take depth-of-field shots with the iPhone XR, albeit the depth-effect generally isn't as striking or distinct.

The XR's front camera is also equipped with a portrait mode. So you can apply 'bokeh' effects on selfies too.